"So here's what I want you to do, God helping you: Take your everyday, ordinary life—your sleeping, eating, going-to-work, and walking-around life—and place it before God as an offering." (Romans 12:1, MSG)

My Winding Road of Grace

Several years ago, my grandmother gave me something I never knew existed – a photograph of my baptism, officiated by a Roman Catholic Navy Chaplain in the chapel at Pearl Harbor, Hawaii, on July 4, 1971. 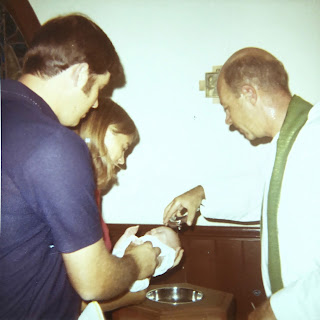 Today, this unexpected gift maintains permanent residence in my Bible, nestled within the first pages of Jeremiah:

"Before I formed you in the womb I knew you, and before you were born I consecrated you..." (Jeremiah 1:5, NRSV)

This image serves as a stark reminder of my parents’ love for me and that they raised me in faith. More than that, it captures the very moment that God staked God’s claim on my life through the sacrament of baptism. This was the beginning of my 46-year journey along a winding road of grace.

Much of this journey included growing up the proud son of a Navy submariner.

Like many sons, I looked up to my father and hoped that I, too, would one day wear the uniform of a naval officer.


As often happens, however, my path took some rather unexpected turns. And so, instead of following in my Dad's footsteps as an officer, I enlisted in the Navy as a submariner...the same way his career began.


The Navy connection my Dad and I shared continued for several years.


By the time I separated from service myself in 1999, the Navy had been an integral part of my identity for 28 years of my life.


In the years since my naval service, God has been at work in my life through the United Methodist Church. For more than eleven years now, I have sought to faithfully live into God's calling by serving the local church, studying in seminary, and submitting myself to the rigor of ordination in my denomination.

The past five years, in particular, have helped mold me and shape me as I have served as an associate pastor at Trinity UMC in Gainesville. The love, encouragement, and support I have received from the congregation and staff, as I have sought to grow in my faith and as a pastor, has been all I could have hoped for and more.


This past summer, I began to sense God calling me to a new season of ministry, in an altogether new direction - Navy Chaplaincy.

For several weeks, I prayerfully pondered what Eugene Peterson calls "the pastor's question." About this question, Peterson writes:

"Who are these particular people, and how can I be with them in such a way that they can become what God is making them?’ My job is simply to be there, teaching, preaching Scripture as well as I can, and being honest with them, not doing anything to interfere with what the Spirit is shaping in them."1

I discerned without a doubt that the men and women of the United States Navy, and their families, are a "particular people" with whom I can relate. I also discerned that my gifts for ministry are well-suited for the work of a Navy Chaplain. More importantly still, my family and I discerned that, if given the opportunity, we would embrace life together as a Navy family.

In mid-December, I was granted an interview at the Pentagon with the Navy's CARE (Chaplain Appointment and Retention Eligibility) Board. Just before Christmas I received the amazing news that I have been selected to serve as a reserve Navy Chaplain.

I cannot convey in the space of this post all that my selection means to me. I will say, however, I am confident that the winding road of grace I have traveled has led me to this very moment. In some ways, it seems I have come full circle.

In the weeks ahead, I will be commissioned as a Navy Chaplain; and, like he did so many years ago, my Dad will again administer my oath as I swear to support and defend our country. I look forward to sharing that moment with the people of Trinity during a commissioning service to be held at our church later this winter or in early spring.

Some of the details about where all this will ultimately lead remain unclear. For now, I know I will be continuing my pastoral ministry at Trinity while fulfilling my naval reserve obligations in Jacksonville during my appointed weekends. I also know that the next step on my journey travels through Fruitland Park, FL, on January 22nd at 6:30pm when I interview with the Board of Ordained Ministry, seeking their recommendation for ordination in full-connection.

No matter where God leads me and my family from here, of this much I am certain - it will be the greatest honor and privilege to wear both the cloth of my nation as an officer in the United States Navy and the cloth of my faith tradition as a representative of the United Methodist Church in the Navy Chaplain Corps. To God be the glory.

Posted by Aaron Rousseau at 4:15 PM

Aaron Rousseau
Gainesville, Florida
I'm husband to a wife with God-given talent that never ceases to amaze me, father to the three most beautiful children I have ever laid eyes on, and pastor in the United Methodist Church, striving to know God and make God known.